I was driving to Comic-con the first day and I started thinking about the various people I was going to be meeting there. It occured to me that I might be able to draw comic strips about each of the various artists that I'm a real big fan of, and impress them with my wit and style with them. I'm not so sure how the impressing went, but they did chuckle. Whether they were just being nice or not, who knows. Regardless, here are the strips I drew.

That's Scott McCloud, incidentally. Scott wrote some of the most highly regarded books about comics in the industry. I had been reading some self-analytical essays recently, and decided a self-analytical comic strip would be entertaining to show to Scott. So I came up with this one.

Damonk of Framed! is one of my favorite cartoonists, and I have a lot of respect for him. Being able to hang around him and the rest of the "keenspace mob" as we were called was a big treat. In any case, the fourtoontellers, a group of comic artists and the core around which the keenspace mob was formed, have their own ongoing serial. I decided to attempt to put them in a strip, and this is what came out.

This is one of those "Hey, that would be funny in a strip" ideas that I have every once in a while. Glych of No Stereotypes was having some problems opening a bottle of beer that Damonk had brought down from Canada so that we could all taste what "real beer" tasted like. I personally don't drink, so didn't try it. But I grabbed Glych's bottle absentmindedly and opened it immediately. Damonk was quite impressed by my beer-opening ability and made some comments about it. So, into a strip they went. Glych's disclaimer: I don't drink (much).

There were many different artists at the Con, and their art styles varied immensely. We ran into Christopher Lopez of Dedos there, who prompted the comment of "My art sucks!" from Glych. So I felt I should make a strip about comparitive art styles. That's Dennis of FogClub, Damonk of Framed, Glych of No Stereotypes, Me from Braven, and Esyla of Angry People. I had actually meant to get Pauly of Untitled Again for the first character, but I couldn't draw him. I had also wanted to get the actual artists to draw each character, but I felt just drawing it myself would save a lot of time and trouble explaining it to everybody. 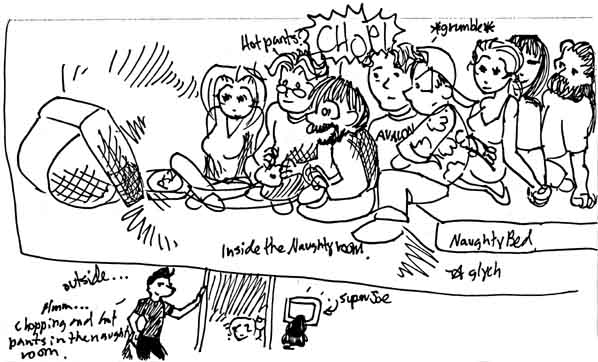 And here's the Chop Day strip that Glych drew. CHOP! is an inside joke from Comic-con that's floating around that we secretly hope will catch on so we can claim we started it.