Well, here they are. I drew these strips near the end of my fourth semester at Harvey Mudd College. They're mostly based on random one-shot occurances that I happened to see a funny twist on. The part that most people at school enjoyed most about these is that they're not changed much at all. These really did almost happen. Hope you enjoy! 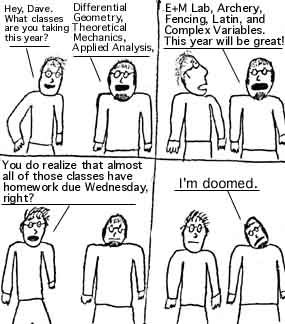 This first one was the first time I had ever drawn a comic strip, unless you count random stick figure doodlings in fourth grade. My roommate had just gotten depressed about how his classes managed to all assign things at the same time. The conversation above almost happened word for word, except that he was the one that realized they all had homework due wednesday. And yes, that was his real class schedule for a semester. E+M refers to Electricity and Magnetism for those non-physics people out there.

A side note: at the time, I wasn't really serious about doing a comic at all, and really didn't know what to call it. My roommate and I decided that we could work together on it, and we'd call it Mired. It can't be seen on this copy, but on the original the Mired title was to the left of the image.

Another side note: I also really didn't know what I was doing as a cartoonist. I drew this first one on lined notebook paper. Ick! Thanks, photoshop! 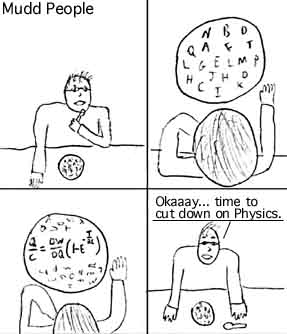 This one came quite quickly after the first, and is actually the only one that doesn't have any basis in reality. I had been working on physics non-stop for several hours and I was really starting to get sick of it. I kept trying to work on phsyics even though I was near half-asleep, and I had this idea/dream for this comic. So I drew it down. Amusingly enough, a majority of the people in my suite recognized the equation, which I had just grabbed at random from the textbook.

Side note: This one, drawn without any collaboration with my roommate, I decided to call Mudd People, which a friend of my dad and fellow cartoonist, Keith Robinson, suggested.

When this happened several weeks after the first two comics and after I had already started drawing Braven, I knew I wanted to draw a comic based on it. Turn "three days" to "three hours" and "world record" to "dorm record", and it happened as written. Dan was so happy with the comic strip that I let him keep the original after I scanned it. So far that's the only original that I haven't kept.

Another personal dedication. Mudd's admissions officer Deren Finks was celebrating his birthday on the same day that several cancellations ended up placing Ross Richardson and I as tour guides together. Deren spent around ten minutes giving a little speech to the assembled students and parents about how great the incoming class and current students were. Ross and I were quite amused, since neither of us fit in the statistics he listed. We both had our separate reasons for managing to be accepted anyway and the statements in the comic are really taken out of context, but still, the statistics seemed a little silly to me. I almost said something after the speech, but I didn't want to embarrass Deren. So instead, I drew it on a comic and showed it to him. He liked it, thank goodness.

Having become preoccupied with drawing Braven, I didn't want to spend the time to draw new Mudd People strips, but I still came up with ideas. So I asked Steph Grush to draw this one for me.

And having not been able to talk to Steph for a while, I made some comment to Adie about needing to find a new artist. She said she'd consider it, so I thought for a moment and came up with this strip. After she was done drawing it, I decided to give coloring a try and colored it. It came out rather well, I think. I think I'll try coloring things more often. Coloring's fun. Whee.